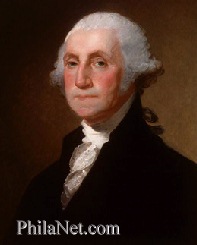 In the summer of 1776, England was very powerful and had Colonies all over the world. It was during this time that the thirteen British Colonies located in North America declared their independence from England. On July 3, 1776, George Washington took command of the United States troops that were surrounding Redcoat-occupied Boston. He devoted the next several months to training and preparing his army of 14,000 men, as well as, trying to obtain the supplies needed for battle (like guns and gun powder.) Early in March 1776, Washington had several encounters with the British in New York City and New York State. He was forced to retreat through New Jersey and into Pennsylvania.

Threatened with an attack on the U.S. Capital (which was located in Philadelphia at that time), Congress had to withdraw from the city. During this time, Washington traversed Southeastern Pennsylvania to an area just South of New Hope, PA. Today the town is called Washington's Crossing. This is where George planned the infamous attack on Trenton, New Jersey. On Christmas night, 1776, Washington crossed the Delaware River, surprised the British troops, and captured the city of Trenton.

But in September and October of 1777, Washington's troops suffered serious losses throughout the Greater Philadelphia Region including the Battle of Brandywine in Chester County and the Battle of Germantown in Philadelphia.

After his loss in Germantown, Washington retreated through Montgomery County to an area now known as Fort Washington and Militia Hill. Fort Washington turned out to be an excellent place for protecting the Colonial position, watching British troop movements, and preparing for the winter in Valley Forge.

It was after the Battle of Germantown on October 4, 1977 that the Continental Army moved toward the Whitemarsh area. By the beginning of November, Washington had setup his camp on Fort Hill. On December 6, 1777, General Howe marched his British troops out of Philadelphia to attack Washington. However, Washington's position proved too strong. Though a contingent of Redcoats made it as far as Church Hill, they were unable to overtake Washington's Fort Hill.

Washington had managed to turn the British back with very little bloodshed. This American victory has become known as The Redoubt on Fort Hill.

As the winter weather turned more severe, Washington started moving his troops to Chester County. He hoped Valley Forge would offer the army a better place to build log cabins and supply the troops. On December 11, 1777, Washington pulled out of the Whitemarsh area. By December 18th, they had arrived in Valley Forge. 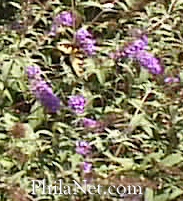 The exact spot where Washington's cannons stood has been turned into a State Park. A deck has been erected that overlooks the Wissahickon Valley. From here, you can walk in Washington's footsteps as you look out toward Germantown.

At the end of the deck, a special "wildlife area" is being nurtured. Though I'd visited the park dozens of times, I had never taken the time to visit the end of the deck. Much to my surprise, there was an extraordinary variety of birds and butterflies. In fact, a public log showed sightings of nearly 60 different species of butterflies. The same holds true with birds. The end of the deck reveals a spectrum of song and humming birds numbering near 200.

The part of the park that encompasses Militia Hill, has become increasingly active with raptors. Raptors? Yes, raptors. Even though the elevation is only 330 feet... and there is no large body of water, all sixteen species of raptors that migrate along the east coast have been spotted over Militia Hill. A group of raptor watchers has formed and now monitors the raptor migration in conjunction with The Hawk Migration Association of North America. Every Fall, the Militia Hill Hawk Watch spots an average of more than 10,000 raptors including the: Bald Eagle, Black Vulture, Broad-winged Hawk, Cooper's Hawk, Golden Eagle, Goshawk, Kestrel, Merlin, Northern Harrier, Osprey, Peregrine Falcon, Red-shouldered Hawk, Red-tailed Hawk, Rough-legged Hawk, Sharp-shinned Hawk, and Turkey Vulture.

The 493 acre State Park offers a simple way to experience nature and history. Over 190 types of birds, 30 mammal species, 16 types of fish, 300 vanities of wildflowers, 37 types of trees (some over 375 years old), and the park's visitors help to keep the memories of our forefathers alive. 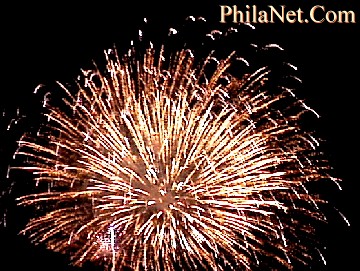 More on the American Revolution
The Map Room
Main Index

© PoliticalAction.com
These graphics, images, text copy, sights or sounds may not be used without our expressed written consent.